Some people, possibly a lot of people, are confused by the term “best rechargeable flashlight” thinking it refers to a flashlight that is powered by a rechargeable battery and usually comes supplied with a separate battery charger. Not so! Rechargeable flashlights are generally powered by a battery specifically designed for that particular make and model. The flashlight, as a complete unit, is recharged by mains electricity, a cell phone charger or USB port, and some have their own purpose-built charging station. Some manufacturers (such as Streamlight) supply a PiggyBack USB charger which can charge the flashlight and a spare battery at the same time.

Still growing in popularity, rechargeable flashlights are usually a bit more expensive than those with rechargeable batteries but save on the cost of buying a charging unit. The major advantages are a reduction in size of the flashlight and an increase in performance due to the dedicated battery.

It pretty much boils down to three factors: Cost, Function and Size. 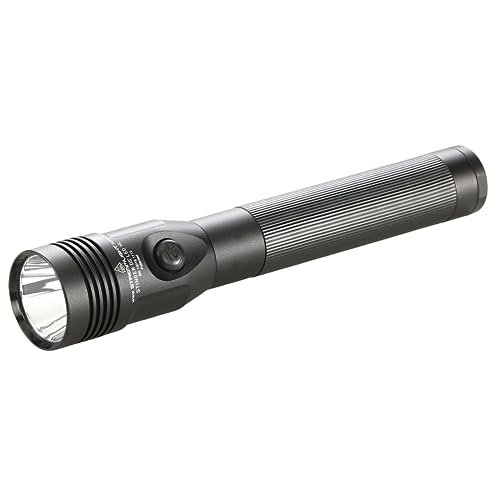 In a word “Perfect”. The 75458 Stinger from Streamlight has the look of a traditional flashlight but all mod cons are provided. Capable of delivering close to 700 lumens up to a distance of almost three hundred meters, the Stinger has all the usual settings you would expect or require. Alongside the High, Medium and Low settings, the Stinger also has Strobe mode which can be used to signal for help in emergency situations or to dazzle a would-be attacker should either of these unfortunate situations arise.

The Stinger is tough and durable being made from aircraft aluminum. The main body is also covered with a non-slip rubber and the flashlight is extremely water-resistant though not waterproof. To round things off, the lens is constructed of unbreakable polycarbonates and is also scratch-resistant. The flashlight is charged from the mains via a 120volt AC/12volt DC PiggyBack charger which is very useful as a spare battery can be charged at the same time. Another bonus is the fact that the battery can be recharged up to 1,000 times meaning big savings on buying new batteries every other week.

They say you shouldn’t judge a book by its cover but there are exceptions to every rule. Weighing in at 13 ounces and just under 9 inches long the Streamlight 75458 Stinger is my personal favourite as it looks and feels like a traditional (even old-fashioned) flashlight while delivering all you would want from a modern flashlight. 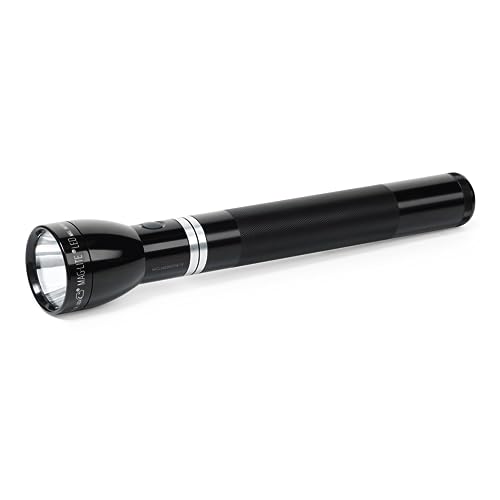 For years I thought that a Maglite flashlight only existed in detective books where every cop on the beat carried one with the sole intention of cracking some would-be criminal over the head. Looking for a rechargeable flashlight a few months back, I was surprised to come across a Maglite RL1019 which seemed to do everything I wanted as well as sounding rather, well, Cool! Not only is my Maglite cool, it is every bit as good as it looks and I can now understand why Maglites ruled the roost for so many years and continue to do so.

Before even taking my RL1019 for a test run, the first thing I noticed was the weight and length. Almost 14 inches long and 2 pounds in weight, the Maglite RL1019 is not only a powerful flashlight but a powerful weapon and would make any criminal think twice before facing up to one.

Constructed with strengthened aluminum, the RL1019 is built to last and also has a reinforced tempered glass lens. Unlike a lot of modern flashlights, the RL1019 uses a halogen bulb rather than LED which I was initially wary of but the halogen light is, if anything, slightly stronger then the LED version. An added bonus is that the RL1019 comes with a spare bulb stored in the tail should something unforeseen occur.

The RL1019 comes with a cradle for charging via mains electricity and a 12 volt adapter with a 120 volt AC converter are also supplied. Another nice added feature is that the Maglite can also be charged using the cigarette lighter in your car.

The Maglite RL1019 supplies all the basic light settings you would require and perhaps overdoes it. With three additional function settings for Law Enforcement, Military and Outdoor, the flashlight can be programmed and personalized to your own tastes but, for me personally, it is overkill. That said, the RL1019 is a superb choice and definitely one of the best rechargeable flashlights on the market. 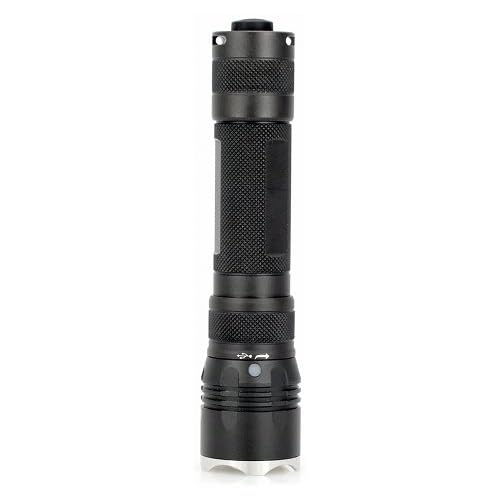 If you are looking for a smaller, lighter flashlight that will fit in your purse or pocket then the Maelstrom Regen MMR-X from FOURSEVENS is the ideal choice. Just short of 5.5 inches long and weighing 5 ounces, the MMR-X is a great flashlight for its size.

Capable of delivering up to 800 lumens of light (for a limited period), the MMR-X can be set to five different brightness levels as well as having strobe and SOS capabilities. A slight drawback is that the Maelstrom uses a dedicated battery (regular batteries may damage the flashlight) but, on the other hand, a fully charged battery can last for thirty days and more on the lowest setting. A big plus for the MMR-X is the fact that it is charged using a USB cable and charger which also works for most android phones.

The Maelstrom Regen MMR-X is a bit small for my personal tastes as I prefer something more weighty and solid such as the Maglite or Stinger. However, that hasn’t prevented me adding an MMR-X to my growing collection of flashlights as it is a great back-up to have in the car and garden shed for those unexpected little crises that pop up every now and again. If you enjoy getting outdoors, going camping, or just want to be prepared for an Everyday Carry, or EDC, flashlights are one of the most essential tools that everyone should