Drones have taken the world by storm, and you can be sure that they are going to be around for years to come. Useful for photography, surveillance and even the delivery of packages drones it’s easy to admit just how useful they – plus they’re just plain good old fashioned fun to fly around.

With their popularity on the rise, a truly huge variety of makes and brands have flooded the market making picking the best model for you difficult. Plus, in conjunction with a GoPro, drones have become the ideal cameramen for sport and otherwise epic footage.

In this guide, we will arm you with the knowledge to pick the best drone for GoPro for your specific needs.

Here are a few tips and things to take into consideration to help you find a great GoPro drone. 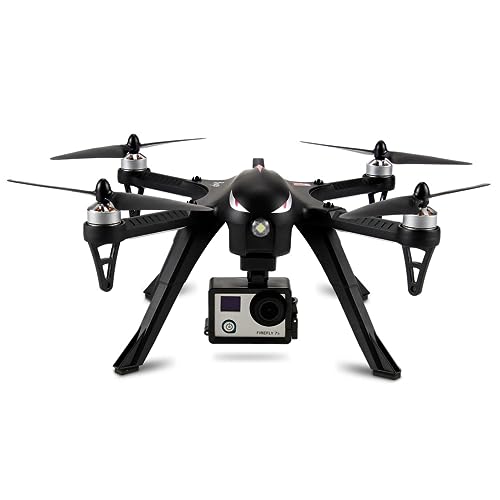 First on our list of best drone for GoPro is the Brushless Motor Quadcopter manufactured by Tokky.

This sturdy flying machine boasts a pure nylon anti-collision frame that is designed to handle more crashes and other collisions when compared to regular quadcopters.

The Bugs 3 quadcopter has been built with 4 MT1806 1800KV brushless motors which provide a maximum upward lift of 230g per motor. The brushless design also translates to superior engine durability as well as prolonged battery life (up to about 50% more).

The brushless engines in combination with a high capacity battery (1800mAh) which provides up to 18 minutes of fly time. The new generation 2.4GHZ two-way remote control enhances the distance control of the transmitter allowing the quadcopter to be flown from 300 – 500 meters. The control also indicates when your drone is running low on battery via dual tones.

The Bugs 3 has been built with independent ESC functionality which prevents engine lock/burn out due to high temperatures providing a worry-free flying experience.

This quadcopter is equipped with gimbal mount adapter with anti-shock absorbance capabilities which easily allows for the attachment of the GoPro 3 and 4.

The super bright LED lights, which aid in orientation and night flying, and 3D flip functionality both make this drone fun to fly. 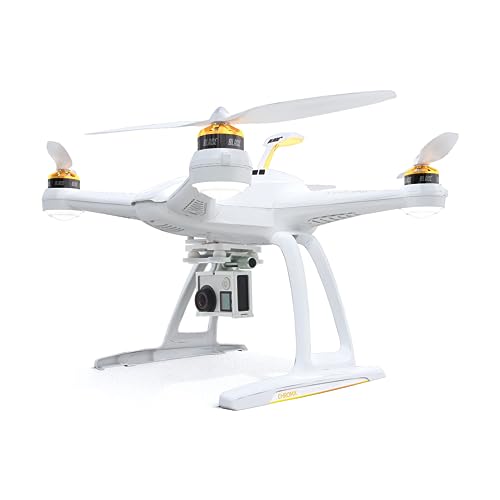 Next on our list is the Blade BLH8680 Bind-N-Fly Drone, another strong contender for the best drone for GoPro.

This fantastic unit is a great drone for shooting aerial video and photography. It has been designed with three main flight modes;

The durable, lightweight camera mount is compatible with most GoPro cameras and can be tilted manually: this, in conjunction with the 5400mAh lithium ion battery, allows for up to 30 minutes of fly time. 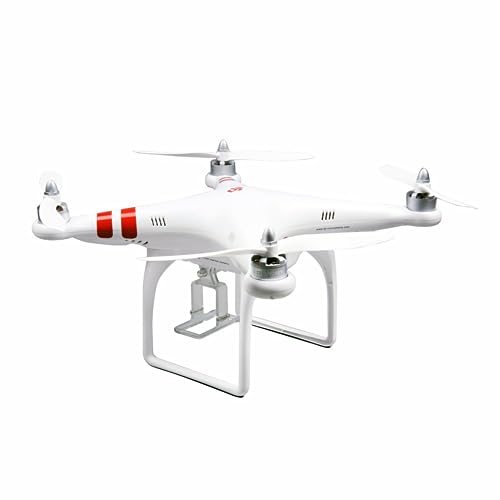 Third on our list is the DJI Phantom Aerial UAV Drone Quadcopter for GoPro.

This drone is a great option for the next generation of movie-makers, extreme athletes as well as remote control hobbyists. Despite its high-tech design and multiple useful functions, the DJI Phantom Aerial UAV Drone Quadcopter is easy to learn – making it a great choice for beginners.

One of the great features designed into the SJI Phantom is the Intelligent Orientation Control or IOC. At the flick of a switch, the IOC functionality allows the switching of flying the drone from its front (or back) to a designated home point: this allows for sweeping recorded shots without losing track of how to keep the drone flying in the intended direction. Linked to this is the internal GPS autopilot which can return to home and land via GPS automatically.

The DJI Phantom boasts a Zenmuse H3-2D Gimbal which is great for ultra-stable video footage.

Its receiver has a range of over 980 feet and can fly for about 15 minutes. It’s ready to fly design boasting automatic navigation, IOC, GoPro camera mount, quick start sequence and sleek, integrated design make this drone perfect for both amateurs and professions alike. 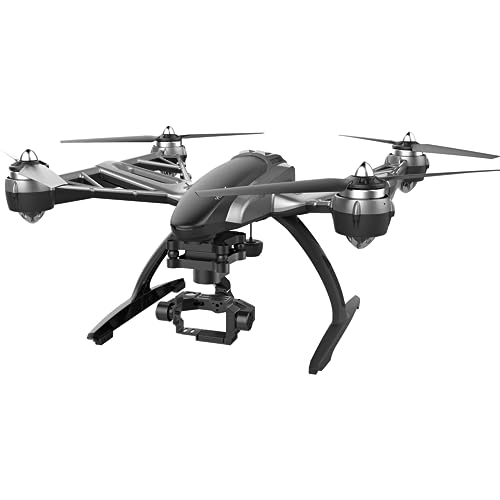 Fourth on our list is the Yuneec Typhoon G Quadcopter – a beautiful looking drone made out of high-quality materials for GoPro usage.

The Typhoon is one of the larger drones for GoPro. This drone itself is made of rugged black and gunmetal gray plastic and has landing legs which have been claimed to be “snap-proof” and protect the GoPro from the ground when landing.

The Typhoon boasts an ST10+ transmitter with a built-in LCD touch sensitive screen which is powered by Android. The intuitive controls allow for the easy manipulation of both the drone as well as the gimbal. The Typhoon boast three standard flight modes: smart, angle and home.

Smart (which allows for the drone to either follow or watch the user while limiting distance and altitude for maximal video reception); angle (for more experienced pilots as it removes the altitude and distance limitations) and home (which returns this drone to the user via GPS).

The range of the live feed is 500 feet, and the drone has a maximal flight time of up to 25 minutes; however, this is closer to 15 minutes if you choose to turn all the bells and whistles. The GB203 gimbal is compatible for use with the GoPro Hero 3, 3+ and 4+ units.

All in all a great done for GoPro. 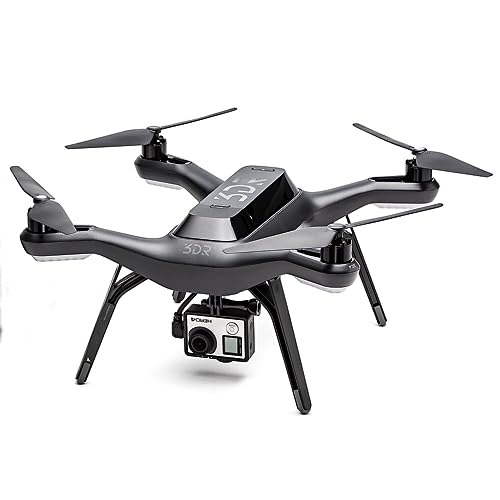 Last but certainly no least is the 3DR Solo Drone Quadcopter which is claimed to be “the world’s first smart drone.”

Powered by a pair of twin 1GHz computers, the Solo is both smart as well as incredibly easy to fly. Plus, with additional features such as simple pushbutton flight control and computer-assisted Smart Shot technology make it easy for both amateurs and professionals to operate.

The twin computers allow for an incredibly smooth aerial photography experience for up to 30 minutes and a host of built-in safety and support features. GPS positioning from its mast-mounted receivers allows for great reception and other functions like “return home” as well as self-leveling to precisely keep the position.

The Solo is also one of the few drones that can wirelessly stream HD video directly from the mounted GoPro to your iOS or Android device. It also boasts in-flight GoPro access which allows you to adjust your GoPro camera options and create great aerial footage.

It is well-designed video game style remote controller allows for the intuitive manipulation of the Solo drone especially if you are a beginning enthusiast. When thinking about buying a drone, everyone imagines the possibilities of cruising through the sky